I have this lovely friend Kathi White.  She is not only a wonderful human being but an avid and talented runner.  I met Kathi when I was living in Belleville, Illinois.  Needless to say we have maintained our friend and running relationship through our distance.  The creed of my blog says: Never.Give.Up.  It means so much more than you probably think.  It’s not just about running and cycling and completing a race to earn a medal or a T-Shirt.  It’s about fighting the hard fight to finish a task you may find important and your journey.  Experiencing the failure, working hard and turning that failure into YOUR victory.  It can be running or something else.  Maybe completing school, preparing for an interview or pushing yourself to new limits to complete something you didn’t think you could ever achieve.  It’s not about being first.  It’s about doing it…whatever it is.

Kathi is a perfect example of the Never.Give.Up creed.  Here is her story and journey about her experience to eventually qualify and then complete the Boston Marathon.  Total respect. 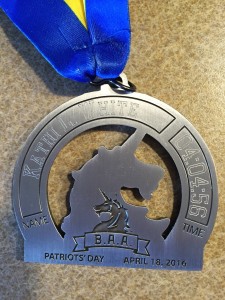 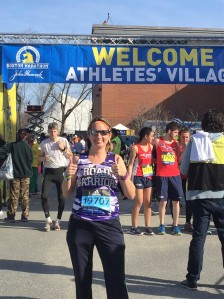 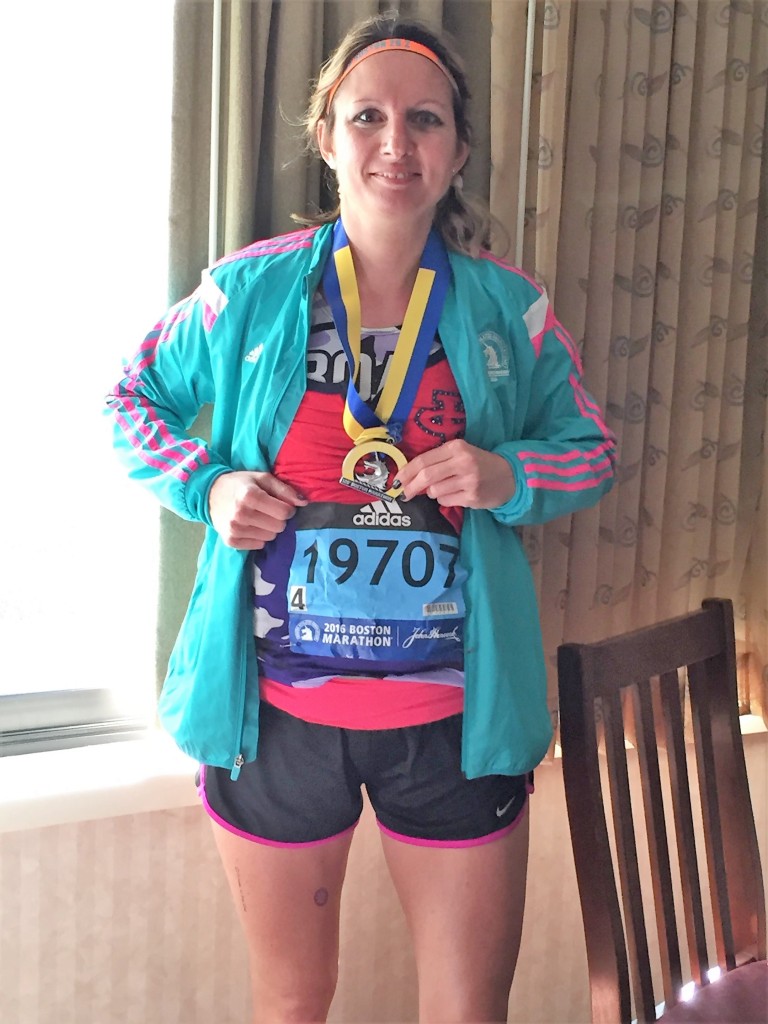 My First Boston Marathon Experience by Kathi White
Wow! I don’t even know where to start! So, I will simply start at the beginning. On Sunday, 17 Apr 2016  when I walked into the expo at the John Hynes Convention Center before I even picked up my runner’s bib, the emotions began to kick in and the tears began! I suddenly realized at that exact moment that this is really happening and I am finally here. 4 years of hard work and seven marathons later this is it!
Fast forward to the next morning, Marathon Monday…I was able to connect up with my friend Jill and ride the bus to Hopkinton with her where Athletes’ Village awaited us. We decided to start the race together. We were in the same Wave but different corrals. You can move back to higher numbered corrals but not move up. Jill decided to move back with me. We had a plan/strategy in mind to run a certain pace and to even try to re-qualify for the 2017 Boston Marathon. We soon learned early on after the first 5-6 miles that may not be possible and we should not stress out about our times and to simply enjoy the race for what it is, the tough course, amazing spectators and everything in between from the beginning Hopkinton until reaching the famous finish line on Boylston Street. After all, I had to stress about my time to even get to Boston in the first place. Why do that now that I was there? Enjoy it I thought. Around mile 10 I decided to pull back and let Jill run ahead of me. She made sure I was ok and not hurt and I assured her I was and to have a good run. I even stopped and jumped on a mini trampoline (actually there was about 6-7 of them lined up with kids jumping on them) that was set up along the course!  Yes, this was my first Boston and I decided to enjoy it, soak it all up and enjoy the experience and the people of Boston and the city’s hospitality. I truly felt like a celebrity amongst the spectators! They almost live for this day on the third Monday every April:),,,Patriot’s Day! The course was tough…rolling hills so I began a walk/run marathon until I finished. This story has a pretty cool ending. I had wondered about Jill after we separated at mile 10 or so and if she had already finished before me, perhaps even requalifying. Just before the finish line, I caught up to her. Unbelievable that we reconnected given we were two of over 27, 000 runners on the course!! Definitely a God thing that we found each other again! You can’t make this stuff up! So we got to finish together what we both started back in Hopkinton!! After all of this I do plan on qualifying again for Boston…it may not be for 2017 but perhaps for 2018! I do plan on going back! It is an awesome event and my favorite marathon of all!! Thank you to everyone for all of the kind words, motivation and encouragement along the way!

1.  Why did you want to run the race?  What was the motive for you as a person.
Question 1 Answer–I wanted to run Boston because it is the “Taj Mahal” of races for amateur runners such as myself. I figured if other friends of mine can run it or even people that aren’t trying to qualify and are running for charities, what about me? I can work hard and try and make it my goal to run there too. The motive for me was to keep pushing towards my goal of qualifying for Boston and running there and to not give up even if I didn’t get the time I needed after my very first marathon.
2.  Did you have any detractors?  If so what and how did you overcome them.
3.  Describe your feelings when you tried to qualify but didn’t make it for the time qualifications.
Question 2 and 3 Answers–My detractors were different marathons I would run and not getting the time I needed or being misled to believe I possibly qualified. Two of my marathons I ran early on in pursuit of a BQ (Boston Qualifying time) were Run for the Ranch in Springfield, Missouri in December 2012. It was a loop course,,,I don’t recommend this at all. I was supposed to loop it 8 times. I only did 7 after volunteers shouted for me to come back to the finish. I thought it was strange because I thought I had another loop to run. Needless to say, I listened to the volunteer and finished. My time ended and I was led to believe I had qualified for Boston. Not true. Another race I became too hot and so I listened to my body and from miles 16-26.2 I walked/ran until I finished. When I would try to qualify and didn’t I would get discouraged until I could find another marathon to run and qualify for. I was not going to give up easily and let one or two races define me. The marathon I did qualify at after running two years prior was the Christie Clinic Illinois Marathon in Champaign/Urbana. April 2013 I missed my BQ by 41 seconds. I had pr’ed (personal record) by 6 minutes! I was upset to be so close, however I finished in the top 10 in my age group! April 2014 is where I became really hot as explained above. April 2015 was my year! I got my BQ time for the 2016 Boston Marathon by nearly 5 minutes! Boston, here I come!
4.  Talk about the race what to expect so other people may learn from your experience.
Question 4 Answer–I pretty much answered this in my Facebook post above. For first time Boston marathoners, run the marathon for enjoyment and not to requalify! I had sheer intentions going into it I too wanted to requalify there. I realized after Mile 10 it wasn’t going to happen. The course is tough and a lot of gentle rolling hills. You definitely want to take it easy in the first 5 miles as it is all downhill. If your used to running rolling hills, then you may have a good chance of requalifying there. I decided  to take past runners’ advice and run the course, enjoy it, soak it all in, the spectators, everything about it. As I stated earlier, I worked hard to get there,,,,why stress so much now?
5.  Do you plan to run again?
Question 5 Answer–I definitely plan on running it again! out of all of the marathons I have ran, as far as enjoyment, Boston is my favorite! As I write this, I am already looking to BQ for 2018! I registered for my 9th marathon, second for this year. The town I live in is having its first inaugural marathon this September. The Belleville Main Street Marathon:-)
Happy Miles to You