I thought this quote would be appropriate for the month of love….

As with most things in life you have to master loving and respecting yourself first before you can master it in others.  I have fond memories of watching the I Love Lucy Show with my Nana.  She was so funny and always had some ‘splainin’ to do.  If you’ve never seen her comedy I would suggest giving it a try.  It wasn’t until years later that I saw older pictures of her that I realized how absolutely beautiful she was apart from being just funny.  I love the look of women from this era.  So classy. 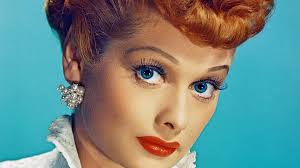 I mean she was just a knock out!

Who was she:  Lucille Désirée Ball Morton was an American actress, comedian, model, film-studio executive, and producer. She was best known as the star of the self-produced sitcoms I Love Lucy, The Lucy–Desi Comedy Hour, The Lucy Show, and Here’s Lucy. Wikipedia.