Happy Sunday everyone!  Another week down and 20 days to go before the Quantico 12K.  Feeling okay this week.  The ankles are still a bit sore, but I was able to soldier on as they say.  I kept my running to treadmill and a flat track surface.  I enjoy running on the track.  It is a good break from running on the road at times.

In the past I’ve had about two pairs of running shoes.  The older pair normally would end up on garden duty!  I have three at the moment that I rotate on a regular basis.  I know, most runners are saying ~ is that all!  For the most part I have had a moderate support shoe, usually favoring Brooks©, Asics© or Saucony©.  I’ve come to the conclusion that the rotating between the shoes I have now, Nike©, Asics© and Hoka© were not the same in rise category and therefore, hurting my ankles.  Different rises cause you to use different muscles.  There is a difference in foot strike between the Hoka shoe I have which causes me to strike mid-foot and the other two which is more of a heel strike, causing me to run differently and causing the pain.  So, it’s bye bye Hoka for now.  There are different Hokas of course, but I think I’m going to stick with what has worked for me in the past ~ the Asics and the Brooks.  Maybe throw in a pair of Saucony from time to time.  All seemed to be comparable to my running style ~ and hopefully will mean less pain.   I talked it over with someone at the local running store and the theory seems to hold some value.

This weeks running plan continued on a road of recovery and training for my race.  I ran on Tuesday, did speed work on Thursday and Saturday was my longer run.  I kept to my plan and stayed at three miles for the long run with a respectable 10:37 pace.  I got a little bit of a late start and paid the price for that in humidity and heat.  I was good for the first two miles but that heat started to set in at mile three.  With no breeze it was a little trying.  It wasn’t too boring because I got to see the high school track team stretching and then they played frisbee in the center field.  It was fun to watch.

I run on the farthest lane or the number “6”.  For some reason every time I would pass the number 6 on the track I would think of the saying “I’ve got your 6”.  The quote is a military saying that originated out of WWI.

“In the military, “got your six” means “I’ve got your back.” The saying originated with World War I fighter pilots referencing the rear of an airplane as the six o’clock position. If you picture yourself at the center of a clock face, the area directly in front of you is twelve o’clock”.  ~ https://www.gotyour6.org/about/faqs/ 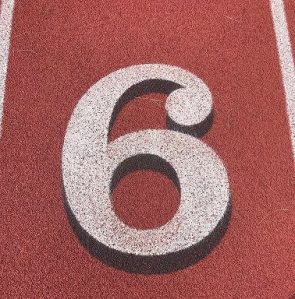