Happy July 7th my friends!  I have been hitting it hard trying to get those miles in towards that 11315 goal.  I have been steadily trying to do something every day, but as you know life happens.  I’m proud to report June was a banner month with 221.26 miles under my belt!

I traveled home to South Carolina to be with my family for a couple of days and was able to get some miles in on the road and beach.

I always love visiting my family at Fripp Island in South Carolina.  It’s a good time to get reacquainted with family.  I took a long ride out to one of the islands and back.  Hot but so good for the soul.  When I ride it gives me time to think about things.  It is enjoyable in a strange way. 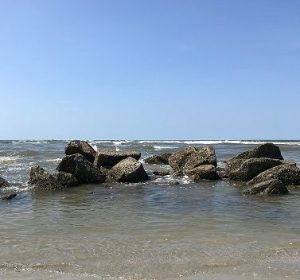 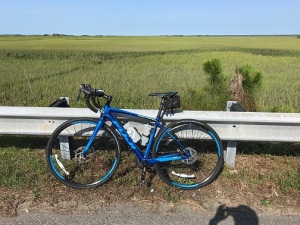 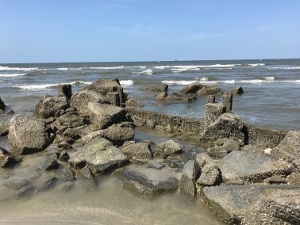 I have a friend that I still keep in contact with from high school.  Although we don’t talk as often as I would like, we have kept alive a vibrant relationship.  These are the small blessings in life.  We went on a cross country trek a few years ago after her partner died of cancer.  It was an uplifting and raw trip.  I am always amazed how life has it’s twists and turns, but yet I still remain grateful for it’s blessings.  It is hard at times, but I trudge forward.  I remember when I was leaving Phoenix for DC, she told me that sometimes it’s ok “to ride the wave”.   I have never forgotten what she told me and think of this statement often.  She was telling me it was okay to go with the flow, to stop trying to swim upstream.  It’s hard to hear that from an old friend, and unfortunately I am an expert at swimming against the tide.  She knows me ~ and was telling me to submit to the changes of life and stop fighting so hard.  I am a fighter and I like to control the outcome of things.  I bring this up because as I was sitting on the beach, I happened to watch a school of small fish trapped behind the rocks as the tide was out.  Every time a wave would come in the would frantically swim against the tide, then the water would bring them back and it appeared they would swim with the tide.  Not just because it was easier, but by swimming with the tide they had accepted a new path.  It was strange to witness but so much in sync with life itself.

I have been training for this Century coming up in August and at times I feel like I am swimming upstream.  Fighting the hills and the training itself.  Today I went out to Prince William Forest Park and I just let all that fear go.  Put the bike in the lowest gear and I made it up all the hills twice over.  Bella good!

On one of my long rides I came across two fraternal twins.  They were trying to take a picture of themselves jumping off a bench.  I offered to take the photo and they in return took a photo of me in my sweet new butterfly jersey.  LOL!!!  It was great talking to them.  They had just finished college and we talked about finding your bliss and that it is important to do want gives you joy.  It was an uplifting conversation.

Smiling was just too hard here…

I was able to complete 231.94 miles this round with 4473.24 miles gratefully remaining.  I made it up those hills and I am trying to ride the wave.  All right now…..Happy Miles to You!!